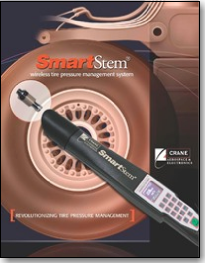 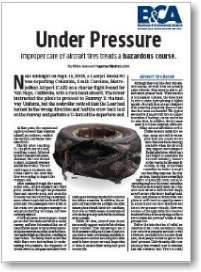 SmartStem technology provides business jet operators with a revolutionary means to check tire pressure by providing convenience, operational autonomy and an assurance of safety that their tires are always properly inflated.

By simply replacing the existing wheel-mounted fill valve with a SmartStem Tire Pressure Sensor (TPS), a  Hand Held Reader wirelessly reads, displays and records the tire pressure for each wheel.

By ensuring tires are properly inflated, operators have seen tire life extended by up to 67%.

With no need to remove the valve cap to reliably check tire pressure, there is no gas loss, which can often occur from a manual pressure check. Some operators have reported going two months without needing to add nitrogen – while assuring that their tires are safely fully inflated.

SmartStem provides convenience – know your tire pressure with the push of a button!

Contact us to request additional information about our SmartStem retrofit products for business aviation.

The most convenient way to equip your business aircraft with SmartStem technology is to purchase a kit which contains all of the parts and paperwork necessary.

Each kit is customized by aircraft model and contains instructions for how to register your aircraft and get access to all of the installation documents including STC Letter of Authorization (LOA) and continued airworthiness documentation. 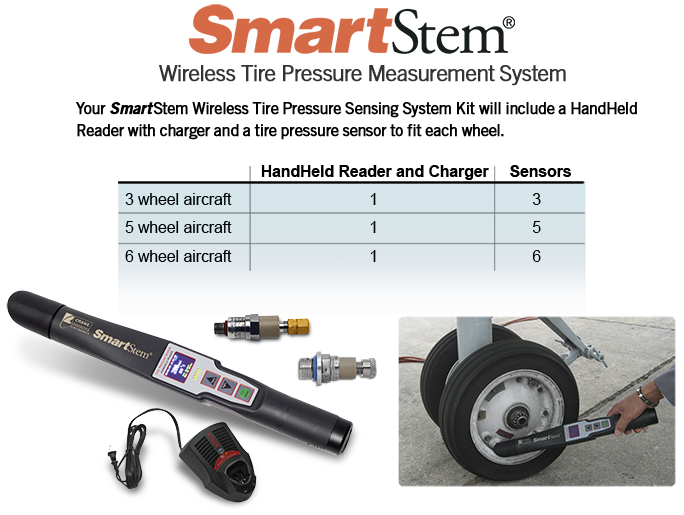 Contact us to request more information about our SmartStem retrofit products for business aviation.

Go to our ORDER FORM.

Contact Us to request more information about our SmartStem retrofit products for business aviation.

See What Customers Are Saying About SmartStem!

“If you saved the airplane from having a low tire and damaging it the payback was instant… In our opinion SmartStem paid back instantly; it’s a safer operation for us, it’s an easier operation.”

“I think it’s tremendous — from somebody who wasn’t very much sold on the idea to a situation where I don’t know what we would do without it. I mean it is just that much of a change for me and our operation.”

"We've had SmartStem installed in our Lear60 since November 2010. We've incorporated tire pressure as a task we do as we pre-flight the airplane. We've gone as long as two months without adding air to the tire, so that in itself saves about $100 every time. I think one of the major benefits is the increased safety that you get by the flight crew knowing what the condition of their tires is."

“Prior to going to a continuous checking process, we were seeing our tires wear out at around 150 to 175 cycles. We’ve now had main gear tires that have gone 293 cycles, operating in and out of a 3,500 foot runway."

“The single most important thing to prevent over-deflection and tire-related events is: Proper Tire Inflation. There are devices out there that that you can use to make it easier. For example, Crane Aerospace & Electronics has SmartStem, which is a pressure sensing valve stem with a wand for checking, makes it a lot easier.”

“The technology provides numerous benefits including reduced maintenance costs, improved convenience, and automatic tracking of tire pressure checks – adding an extra measure of safety and extending tire life. It is also designed to be easily retrofitted on existing aircraft since it is compatible with all standard tire maintenance equipment.”

"All the negative aspects of using a tire gauge have been removed - things like the loss of nitrogen when we check tire pressures, debris entering the stem when you check it, or unseating the valve stem and having it not seat properly and losing tire pressure that way.”

Contact Us to request additional information about our SmartStem retrofit products for business aviation.

Contact Us to request additional information about our SmartStem retrofit products for business aviation.

After you have purchased a SmartStem system, please register your products using the link below.

Registering your SmartStem system will enable you to download a copy of the STC, LOA and other necessary paperwork to permit installation of SmartStem TPS on your aircraft.  Please note that only the documents within the CCL labeled as “Descriptive Data” are required and are available for download.

Contact us to request additional information about our SmartStem retrofit products for business aviation.