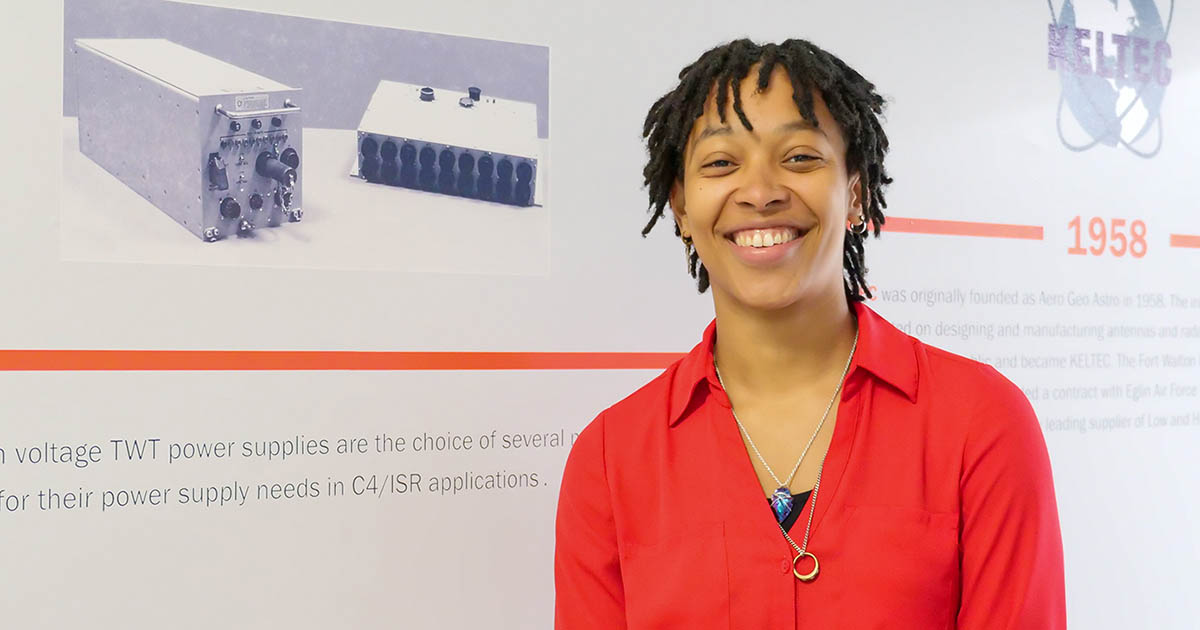 From a young age, Jordan Jones wanted to leave her mark on society, and she knew the career for it.

“As a young child, I always wanted to be an engineer so I could make a change in the world,” Jordan said.

As a young Crane Aerospace & Electronics Electrical Engineer and military veteran, Jordan is already leaving her mark. She served six years in the U.S. Army, preserving the safety of U.S. citizens, and at Crane A&E Jordan helps develop power solutions for the U.S. military. Also, as a black female engineer, she is bridging the gender and minority gap in STEM careers and serves as an important role model for youth.

“I think the more the youth see people that look like them in a position they aspire to be in, that is beneficial,” Jordan said, “because it’s hard to picture yourself in a position no one that looks like you has.”

Jordan was fortunate to have a great role model growing up – her grandfather, who was a structural engineer in Atlanta where she was raised. He told Jordan an engineering career is challenging but very rewarding and guided her in the right direction, she said.

Jordan’s interest in engineering gained momentum after taking a high school drafting class, but her path to becoming an engineer took a detour when she left college after a year to enlist in the military. She rose to the rank of Sergeant in the U.S. Army and was responsible for running the motor pool and teaching soldiers how to drive wheeled military vehicles.

"Black History Month to me is a celebration of how much we as an entire race have accomplished despite the continuous adversity we have faced. It's about appreciating our ancestors and their excellence. That to me serves as motivation to strive for success and greatness in my life."

Shortly after Jordan’s enlistment, she returned to college at the illustrious Tuskegee University, a Historical Black College and University (HBCU) in Tuskegee, Alabama. Jordan was a fourth-generation legacy student. She was following the footsteps of her mother, grandmother, grandfather and her aunts and uncles – who all attended Tuskegee University.

“An HBCU experience is like no other,” Jordan said. “It’s a history lesson everyday that you are on campus, and not intentionally, because you are surrounded by so much history. It’s so rich in information and history that it’s a pleasure to be there everyday and soak in what people have done before you for you to be in this position.”

Tuskegee University is home to Booker T. Washington, a heralded educator who founded the school and rose from slavery to become a presidential advisor in the mid-to-late 1800s and early 1900s. Famous historical figures such as scientist George Washington Carver and the Tuskegee Airmen were also educated at Tuskegee University.

Jordan’s lived experiences, combined with her time at history-rich Tuskegee University, gives her a unique perspective on the importance of Black History Month. She shared what the month means to her.

“Black History Month to me is a celebration of how much we as an entire race have accomplished despite the continuous adversity we have faced,” Jordan said. “It’s about appreciating our ancestors and their excellence. That to me serves as motivation to strive for success and greatness in my life."

“It’s an annual reminder that without black history, I feel there would be no history. It goes beyond the narrative of racism and slavery and highlights the inventions and impact that African Americans have had on the world.”

At Tuskegee University, each year during Black History Month, Jordan would volunteer at local elementary and middle schools. She’d talk to students about her lived experiences and what life was like as an electrical engineering student at an HBCU. She wanted to recreate the role model figure she had growing up.

“I wanted to do community service during the month just to give back to the youth and hopefully leave a mark on somebody,” Jordan said, “and if it’s just one person, that’s fine.”

Jordan graduated and joined Crane A&E in October 2020. She works at A&E’s Fort Walton Beach, Fla., site, which primarily develops high power solutions for the defense industry. One of the site’s recent contributions is a power system for the U.S. Army’s Lower Tier Air & Missile Defense Sensor, which Raytheon Missiles & Defense is building and calls GhostEye.

“I take pride in working at Crane, because of the projects that we work on and the supplies we give to different contractors,” Jordan said, “and I look forward to a long, impactful career at Crane.”