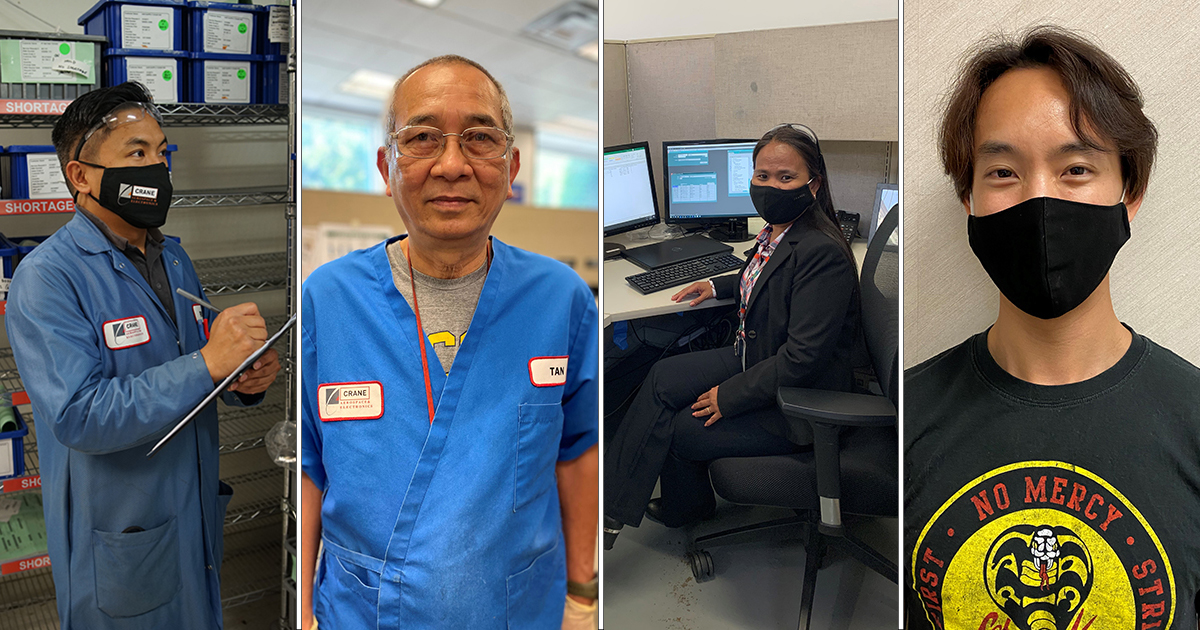 During Asian American and Pacific Islander Heritage Month, we are proud recognize several of our Burbank, Calif., AAPI employees who make an immeasurable impact at Crane Aerospace & Electronics. Throughout our six U.S. Crane A&E locations, and across multiple departments, Asian Americans and Pacific Islanders add to the ingenuity, innovation and strength of our company. We’re pleased to share a few of our employees’ stories and are thankful to all our employees for making Crane A&E a diverse, inclusive and equitable place to work.

Marisa stays plenty busy in her Crane Aerospace & Electronics role. As a Production Planner II for Cabin Solutions, she is responsible for master scheduling, production planning and supports inventory management. Marisa’s continuous improvement mindset has helped her thrive in her role.

“I like to study,” said Marisa, who is approaching three years at Crane A&E. “Even here at Crane, I requested from my boss if I can enroll in a class and got another certification just last year. I never stop studying. I always want to learn more and improve myself.”

Marisa developed her strong work ethic growing up in the Philippines, where she earned a degree in industrial engineering. She worked in supply chain for 15 years before immigrating to the United States to marry her husband in 2011.

"Crane provided me the true meaning of equal opportunity, regardless of race and gender. I appreciate the unlimited opportunities to grow and the excellent working environment."

In the U.S., Marisa and her husband formed a small business installing and repairing air conditioning and conveyor oven units. She completed office work and helped on the maintenance of the business, but Marisa desired a return to the supply chain work she did in the Philippines. Facing an uphill battle as an immigrant, Marisa started looking for educational opportunities in 2015. She joined the APICS San Fernando Valley Chapter, earned CPIM certification and after she got her U.S. citizenship in 2018, she discovered a job opening at Crane A&E.

“It was kind of hard to get into a multinational company right away as an immigrant,” said Marisa, who was a scholarship student in the Philippines that was paid to go to school. “I looked for a course that would give me one step ahead. I wanted to add more credentials for me to be considered for a job.”

At Crane A&E, Marisa has found a rewarding role that puts her ingenuity and education into action. She supports a Cabin team that provides seat manufacturers and airliners with a wide-range of innovative, high-quality and reliable seating solutions.

“Crane provided me the true meaning of equal opportunity, regardless of race and gender,” Marisa said. “I appreciate the unlimited opportunities to grow and the excellent working environment. At Crane, all team members are involved, supportive and get the opportunity to showcase their skills. Also, working at Crane enabled me to fulfil my life goal of supporting my family, friends and less fortunate member of the community in Philippines, especially during this pandemic.”

Marisa has witnessed current events around anti-Asian sentiment over the last year. While she considers herself “lucky” to have not faced discriminatory behavior, she believes everyone is innately good and hopes people can show a greater sense of respect and compassion for one another.

“These current events about hating Asians is very disturbing, and I’m very sad to see that on the news,” Marisa said. “It bothers me a lot, actually, to see that, and hopefully people will be more considerate and have more respect for each and every human and race.”

As a first-generation Asian American, Travis Trinh is determined to rise from the strong foundation his parents built for him. Travis’ parents – both half-Vietnamese and half-Chinese – immigrated to the United States to escape the Vietnam War. They settled in California and showed Travis what it takes to have a successful career by working their way up from entry to senior-level positions.

The sacrifice of Travis’ parents is a constant motivator.

“My parents worked really hard and went through a lot of adversity to give me this opportunity,” Travis said. “I’m not going to waste it. It’s not so much for myself, but for their hard work. Of course, I want to work to be the best me I can be, but a lot of it is not only for my own benefit but to make my parents proud.”

Travis earned a Bachelor of Science degree in Mechanical Engineering from the University of California Santa Barbara and has worked for Crane Aerospace & Electronics for over a year. As a Manufacturing Engineer II, he supports finishing operations of A&E’s highly-engineered components, helps sustain the factories he’s assigned to, brings in new technology and looks for productivity savings among other tasks.

“Knowing that I’m supporting a factory that is able to maintain such tight tolerances – we’re talking fractions of a hair – it’s pretty amazing to do that in our facility,” said Travis, who primary works with A&E’s Landing Systems group, which supplies landing systems to countless aircraft throughout the world.

"My parents worked really hard and went through a lot of adversity to give me this opportunity. I'm not going to waste it. It's not so much for myself, but for their hard work."

Travis’ most rewarding project, he said, has been providing in-house operational capability to one of Crane A&E’s Computer Numerical Control (CNC) machines. Travis learned the machine, learned how to program it, run it and trained other programmers and operators.

“That is really rewarding, because I’m basically the pioneer in that direction,” Travis said. “No one else has had the opportunity to sit down here and kind of learn those machines.”

Outside of work, Travis enjoys dancing and started a hip-hop, Korean fusion dance group at his college that he still engages with. He also enjoys staying fit and makes a conscious effort to work against some of the Asian stereotypes he said are prevalent in our society.

“As far as the animosity and discrimination toward Asians, especially with COVID, people typically look for scapegoats and excuses,” Travis said. “It’s easier that way instead of finding faults or issues inside their own circles. Not only, of course, do you want to do your best to educate other people on why this isn’t correct, but look within yourself and think what is really causing this. Think of your actions.”

With components and systems on countless aircraft throughout the world, Rome Kenmepol and his Repair Station team help ensure the safety of thousands of air travel passengers each day.

“In my current role, what’s really rewarding is learning how good our products are,” Rome said. “I’m getting stuff that has been out in the field for 20 years, in some cases, and it just failed. It’s always interesting. I get to kind of bring everything back to life – see what comes in from the field in whatever condition and bring it back to service. We’re helping make sure everyone is safe.”

Rome, a Repair Station Supervisor at Crane A&E’s Burbank, Calif., facility, is approaching 10 years with the company and has been with A&E since landing an internship out of college.

"I get to kind of bring everything back to life - see what comes in from the field in whatever condition and bring it back to service. We're helping make everyone safe."

Rome graduated from California State University, Northridge, with a mechanical engineering degree and started out interning in quality before getting full-time work as an ME. Seven years into his career at Crane, Rome transitioned from a manufacturing engineer to his current role leading Burbank’s Repair Station.

“The stuff that we do in Repair Station, it goes straight to the airlines, and it could be going straight onto the plane same day potentially,” Rome said. “So, we need to make sure we are doing the right thing.”

Rome is a first-generation Thai American. He was born in the U.S. but moved to Thailand shortly after his birth and then returned to the United States 4-5 years later. Rome draws inspiration from his parents, who both worked hard in the restaurant business to provide him the opportunity he has today.

“My parents came with nothing,” Rome said. “They are just proud the first generation has been able to come this far out here and make dreams come true.”

Rome and his family grew up in a diverse California region and found a large Thai community, which helped them stay connected with their Thai culture. Rome still speaks Thai and reiterated the importance of not letting his Thai heritage and culture fade as generations pass.

For 41 years, Tan Hoang has used his skill and expertise to match grind precision components to meet all the requirements of Crane Aerospace & Electronics’ highly-engineered and reliable products.

Tan is a Hone, Lap and Grind Team Lead at Crane A&E’s Burbank, Calif., facility where he leads a group of employees who manufacture A&E’s Cabin and Landing Systems products.

“I use my skill and knowledge to cross-train co-workers and new hires,” Tan said. “We work as a team to make sure all parts are meeting or exceeding blueprint requirements and collaborate with supervisors and manufacturing engineers. There has been a lot of change over the years due to continuous improvement. We’ve replaced old machines to increase productivity and quality.”

Tan found a home at Crane A&E in 1980 when he moved to Burbank after working several years as a machinist – his first job in the U.S. Tan, who is Vietnamese, immigrated to the United States in 1975 after the Vietnam War. He was serving in the Vietnam Air Force, and with much uncertainty following the war, he decided to come to the U.S.

"I use my skill and knowledge to cross-train co-workers and new hires. We work as a team to make sure all parts are meeting or exceeding blueprint requirements and collaborate with supervisors and manufacturing engineers."

Tan’s journey to his new life in Burbank was extensive. He was taken from Vietnam to a U.S. aircraft carrier to a refugee camp in Arkansas. From there, he moved to Colorado with a refugee sponsor before moving and settling in California.

“Back in 1975, the biggest problem for me was the language barrier,” said Tan of his transition to a new culture. “After that, in Colorado, people looked at me and it was a new thing for them, but when I moved to California, I blended into the community pretty well.”

Tan enjoys his role at Crane A&E and has been instrumental to the smooth operations at A&E’s Burbank facility.