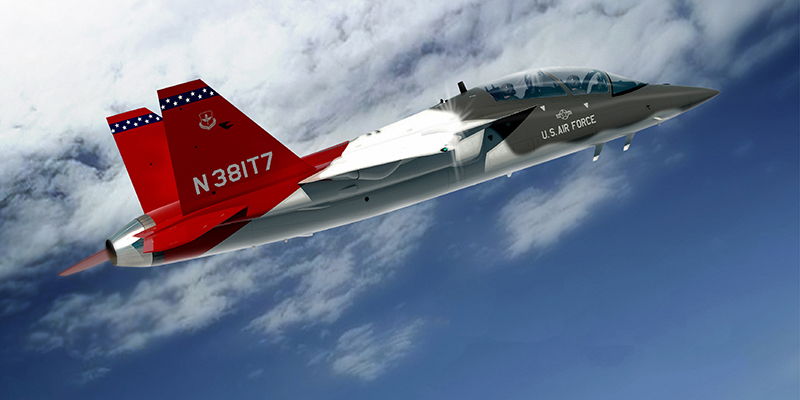 McGee flew more than 409 combat mission during WWII and the Korean and Vietnam Wars. His presence was particularly special given the jet trainer’s newly revealed name — the T-7A Red Hawk. The name pays homage to the Tuskegee Airmen, whose 332nd Fighter Group and 100th Fighter Squadron painted the tails of their P-51 Mustangs and P-47 Thunderbolts red to differentiate themselves from the enemy.

Besides valiant service on the battlefield, the Tuskegee Airmen helped break down racial barriers, becoming the first African American pilots to serve in the U.S. Military.

Crane Aerospace & Electronics is proud to share a role in the development of the new jet trainer, which is being produced by Boeing. The aerospace manufacturer was selected by the U.S. Military in September 2018 to construct its new fleet of advanced trainer aircraft.

We are honored to be on board Boeing's future pilot training platform for the U.S. Air Force. It underscores Boeing's continued confidence in our ability to provide high performance brake control systems for military as well as commercial aircraft platforms.

Boeing will provide 351 T-7A Red Hawks and 46 training devices for the Air Force, which is replacing its 57-year old T-38 trainer planes. Crane A&E was tabbed by Boeing Defense, Space & Security in June 2019 to provide its brake control system (BCS) for the aircraft previously being called the Boeing T-X.

“We are honored to be on board Boeing’s future pilot training platform for the U.S. Air Force,” said Carl Trustee, Vice President & General Manager, Landing Systems at Crane Aerospace & Electronics. “It underscores Boeing’s continued confidence in our ability to provide high performance brake control systems for military as well as commercial aircraft platforms.”

Crane A&E has more than 70 years of experience delivering brake control systems, with more than 30,000 systems in operation today.